We humans have long marveled at bees, their social structure, their creations, and the fruits of their labor. Throughout Asia, Mesopotamia, Egypt, and Aegean cultures, honey was considered a magical substance. It was the most common ingredient in ancient medicine, the basis for beverages like mead or honey wine, and even used for mummification. After his death, Alexander the Great was preserved in honey before being placed in a sarcophagus. Apollo was bestowed the gift of prophecy by a trinity of pre-Hellenic bee goddesses1.

The great Mycenaean bee goddess Potnia, meaning “mistress,” was  known as the “The Pure Mother Bee,” and  presided over priestesses called “Melissa” (bees)2. Potnia and her Melissa were central figures to a longstanding Minoan beekeeping craft that included making mead and burying golden bee pendants with the dead to evoke the sacred connection bees were believed to have with the underworld and the living world.  Egyptians thought bees were born from the tears of the sun god Ra3. A cave painting dating back to 13000 BC shows an androgynous figure climbing down the side of a tree taking honey with them as bees fly about their head4.

All of this is to say, bees have long been the subject of reverence in times past. Yet, recent decades have ushered in a diminishing respect, admiration, and concern for these awe-inspiring creatures. If bees are to survive, we must learn to do better.

Here is an exercise in cross-species empathy:

Imagine you are a young girl. You are cared for by young women who diligently feed and instruct you. These women mean everything to you, and their mother, the queen, means everything to them. You spend youthful days learning how to make cradles for the next generations and prepare a traditional delicacy. Intimacy and closeness are vital when living in the total darkness of the cave-like dwelling your tribe has built; every movement you make depends on the messages you receive from your family members in the forms of vibrations, intoxicating scents, and loving caresses.

As you grow older, you take on the caregiving role for newborns. You become absorbed with the tasks of feeding your baby siblings and leading beautiful little toddlers around the cave to show them the methods of making food.

As an adult, you’ve mastered countless skills and are ordained guardian of the cave entrance. Age has slipped you into prominence and grace. You have garnered deep respect out of immense discipline and dedication, fortifying your place among the family as you grow into a central role: to care for your beloved mother queen. You become her faithful handmaiden and contribute as best as you can to her health and wellbeing. She is the central power and beauty of your world.

Time passes in harmonious living; your life has been given a purpose and your place among the family is secured and valued.  One day, the elders of the tribe select you to follow them out of the cave. The world is teeming with fragrance, sunlight, and color. The play of wind, dust, and leaves drives a zeal to explore—a new responsibility calls to you from plant wells containing the freshest juices you have ever tasted.

You are immediately compelled to seek out the source of nostalgic smells wafting towards you; you discover the scent of your entire home and family now emanating from painted wells rooted to the earth.

You plunge your face into a soft pile of yellow cakes that send pleasant feelings all over your body. You rub your whole body around in this yellow gold. Suddenly, you are overwhelmed by an understanding. Somehow you just know these tiny round crumbs affirm your entire existence and everything that your family works so hard for. You take a deep refreshing mouthful of sticky juice from a shimmering tower of geometrical wells. You return to the cave and pass on the yellow cakes to your younger sisters who then turn it into baby food. One of the older foragers begins to dance, and the other women mimic her. Embedded in the dance are directions to a fresh patch of wells brimming with juice and yellow cakes. You feel drunk on sweet juice and dancing. 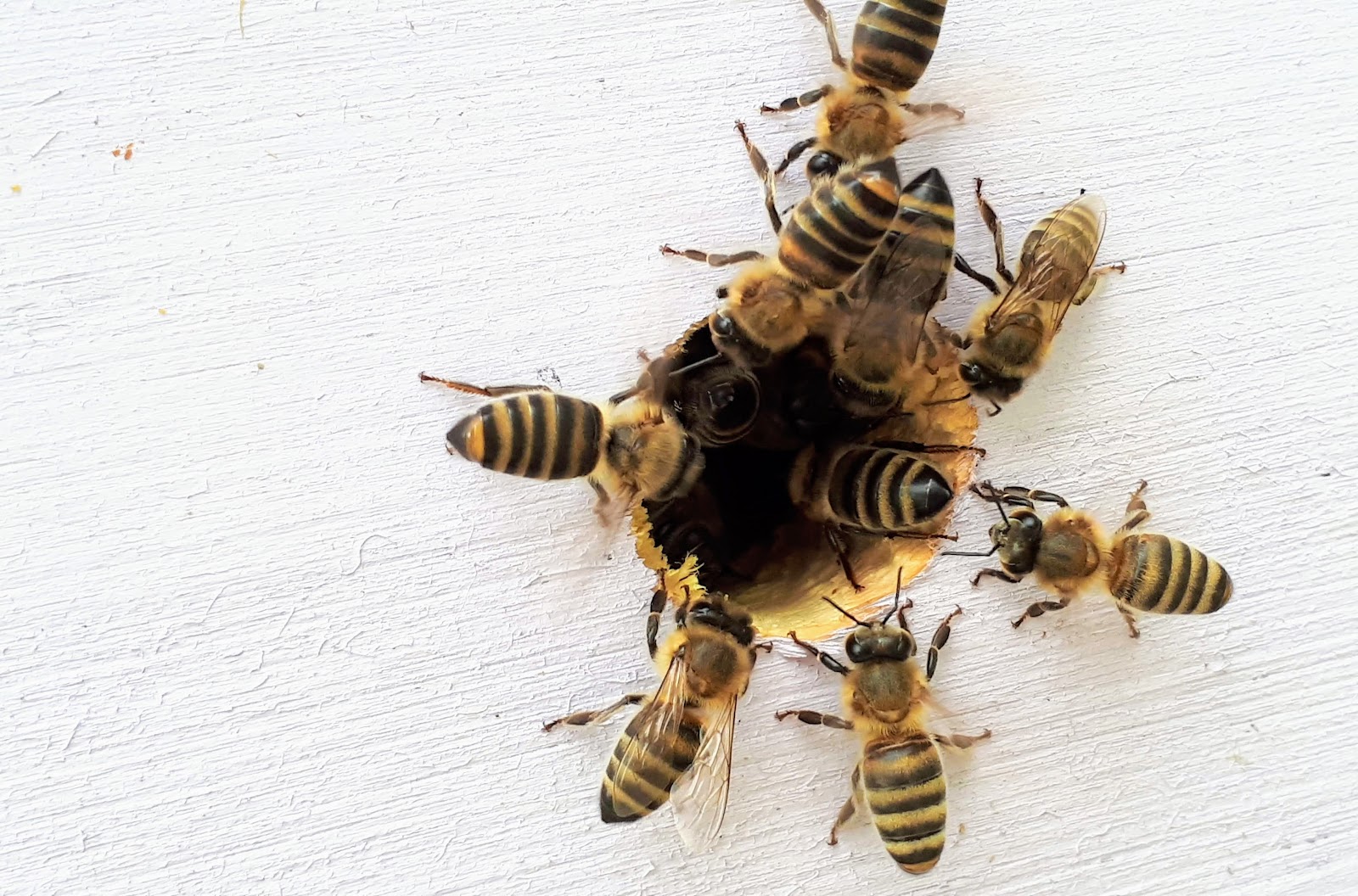 As a worker bee you are nursemaid, architect, dancer, and mother to the queen. You clean the hive, groom the queen, feed the brood, handle and comb nectar, develop wax combs, guard the entrance, and forage for pollen and nectar. Your rich communal life is satisfying and purposeful not only for the continuation of your own kind, but because it helps form the basis of ecological harmony with all other species. Yet, you and your kind are in great danger. Regularly you experience invasions by monstrous mammals who demolish several fields of nectar and yellow cakes in one sweeping assault.

For as long as the tribe can remember, these same giants have been robbing small portions of your baby siblings’ food. Your family adapted to these robberies for their relative triviality, but lately, the invasions are accompanied by strange noxious fumes and caustic sticky residues that rapidly madden and kill the elder foragers. Lately, too, blood-sucking predators have been making their home right within the cave. No one is able to fight them off.

Today, bees face an increasingly common invasion of parasitic mites within the hive, toxic chemicals from pesticides, and destructive agricultural practices like monocultures5. Every continent except Antarctica is home to honeybees, and every continent since the 1950s, except Australia,  has a severely declining bee population.  These dangers are considered by experts to be interactive causes, meaning they happen to the bees simultaneously, making it difficult to isolate one issue. Thus, for the past century alone, these persistent issues have created a dramatic decline of bee colonies, which experts call “colony collapse disorder.” The term describes the increasingly common occurrence of adult bees spontaneously leaving a healthy hive en masse, never to return to the healthy larvae and perfectly habitable honeycombs.

This story is not one that simply concerns the livelihood of the bees; modern humans’ survival depends on them. Our exercise in cross-species empathy is centered around the bees, but it has everything to do with us. It would be impossibly tragic to do nothing to stop the global decline of the bees. Honeybees are the world’s most efficient pollinators and pollinate at least 33%  of human agricultural production—that production is responsible for 75% of plant consumption. Should the honey bees go extinct, the world would lose all of its nut and fruit orchards, a handful of medicinal herbs, almost every beloved vegetable, and several thousand species of flowers. Not only the bees will suffer for our carelessness—without them, our lives will never be the same.

Siggy Franzen has been writing essays for years on the psychoanalytic approach to philosophy, art history, mythology, and anything that examines the depths of the human condition. Having recently finished her B.A. in Cultural Anthropology, she fills her days studying literature and nonfiction while writing short stories. Follow her on Instagram and Medium.